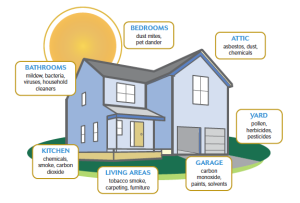 Survey commissioned by the Building Engineering Services Association (BESA) reports that almost 70% of office workers believe poor air quality in their place of work is having a negative effect on their day-to-day productivity and well-being. Additionally, a third of office workers are concerned that poor indoor air quality could be having a negative effect on their health. Opening windows is the most commonly used form of ventilation with 60% of office workers saying it is the first thing they do if they need fresh air. However, this could run the risk of further polluting the working environment by letting in outdoor toxins. Those surveyed, reported suffering regularly from symptoms commonly linked to poor indoor air quality:

In indoor environments. On each day, the subjects took tests measuring a wide range of cognitive abilities. One of the parameters tested was the difference between air quality in the average office building compared with that in a ―green‖ building that meets standards for occupant health and energy efficiency set by the LEED council. The scientists found that in the green condition—where air was better ventilated and had lower carbon dioxide and VOC concentrations—participants scored 61 percent higher in cognitive function compared with those in conventional office building conditions. When exposed to ventilated air, cognitive scores jumped 100 percent.

For poorly ventilated office buildings and homes with frequently operating printers, VOCs and ultrafine particles could be a serious health threat. An important area requiring further study is the formation mechanisms of nanoparticles emitted from laser printers. Kagi et al. (2007) and Wensing et al. (2008) pointed out that the ultrafine particles generated from laser printers were not the toner particles themselves, but rather a product of secondary formation due to volatile organic compounds (VOCs) and water mists emitted during the printer operations.

Thus, possible sources for nanoparticle generation in this process include: 1) fugitive toner powder agglomerates released directly from the printer cartridge, 2) loose particulate coatings released from the paper, and 3) evaporated VOCs produced in high-temperature fuser region, emitted from the polymer coating of the toner powder. The material safety data sheet (MSDS) for the standard HP C8061X toner cartridge for the HP 4100 LaserJet Printer employed in the study states that the toner powder contains about 50% iron oxide and 50% copolymers by mass.

The copolymers possibly include styrene, as well as other organic components and solvents. It should be noted that the concentration peak levels generated during power-up are much less than the peak levels generated while printing (Figure 1). This implies that evaporation of the toner powder on the paper, rather than residual toner on the fuser, is the major source of nanoparticle emissions. Over 10 different VOCs were detected.

Among them, m, p-xylene had the highest concentration, approximately 160 μg/m3, and o-xylene and styrene were the second highest, with concentrations of approximately 100 μg/m3. For the samples taken over the entire testing period, including printing and idle time, the concentrations of all VOCs were approximately 30 times lower, but the concentration ratios between these VOCs remained unchanged. The emitted aerosol mainly consisted of carbon-based nanoparticles, likely generated by ion-induced homogeneous nucleation and condensation from the vapor-phase VOCs evaporated from copolymer toner particles rapidly heated by the fuser.

Few iron-based or calcium-based particles were found in the printer emissions, suggesting that the unevaporated toner particles and paper coatings were not important nanoparticle sources. Several VOCs including xylene, styrene, and ethylbenzene have been identified as printer emissions. The maximum possible VOC emissions were estimated from TGA and ICP measurement results to be about 42.8 μg per printed page.

Figure 1. Levels of pollutants during printing and resting of the machine

For example,the mean office level of benzene in eight European countries was 14.6 μg/m3 . The toxicity of benzene is dependent on its metabolism, as shown by its lower toxicity in the presence of toluene, an inhibitor of benzene metabolism. Many studies have been completed in animals and to some extent in humans to determine the metabolism of benzene and its toxicokinetics. Indoor concentrations of benzene are normally higher than those in outdoor air as a consequence of the entry and accumulation of benzene from outdoor sources and the presence of dominant benzene sources indoors.

Viewed across published studies, indoor concentrations of benzene ranged from 0.6 to 3.4 (arithmetic mean 1.8) times the outdoor concentrations and are greatly influenced by those outdoors. This occurs in part because there are numerous indoor sources of benzene and because the relatively low rates of ventilation typically used in residences and offices prevent the rapid dispersal of airborne contaminants.

One of the most common pollutants in office is surely formaldehyde. Over the period 2004–2007, the EU‘s Joint Research Centre in Ispra, Italy monitored priority pollutants, including formaldehyde, in European public buildings and environments where children frequently stay, such as schools and kindergartens.

Consequently, the indoor : outdoor ratio is always far above 1. Formaldehyde can be qualified as a very specific indoor pollutant, which causes irritation and various discomforts at very small values.

Since smoking is not permitted in the office buildings, resuspension of settled dust and particle emission from printers, photocopiers and multi-task devices are well-known indoor sources for larger particles (with aerodynamic diameter larger than 1 μm) and UFPs (ultra fine particles)respectively. Indoor activities could expose people to high concentrations of ultrafine particles due to the insufficiently fast removal of particles from the buildings where particle sources operate, and in turn causing a range of diases.

Indoor PM2.5 mass concentration values varied between 2.6 and 31.2 μg m-3 in the 20 office buildings investigated across Europe (Szigeti et al., 2016). The lowest values were obtained for the Dutch offices which were the only unoccupied offices (meeting rooms) during the sampling campaigns. PM2.5 mass concentration values exceeded the ambient WHO guideline of 25 μg m-3 (24-h mean; WHO, 2005) in 12.5% of the cases.

It must be noted that the particle formation more likely takes place in the outdoor environment and the particles penetrate into the offices through the heating, ventilating and air conditioning (HVAC) system and/or opened windows and doors PM encompasses many different chemical components and physical characteristics, many of which are potential contributors to adverse health effects. The evidence is on the PM2.5 size fraction (particles with aerodynamic diameter smaller than 2.5 μm) since several epidemiological and toxicological studies have already shown the association between the mass concentration of PM2.5 and certain respiratory and cardiovascular diseases or mortality (e.g., Brook et al., 2010; Hoek et al., 2002; Laden et al., 2000). In the past years, oxidative potential (OP), which is a measure of the capacity of PM to oxidize target molecules (e.g., physiologically relevant antioxidants), has been proposed as an additional or alternative exposure metric alongside PM mass concentration.

Emission of particles from laser printers in office environments is claimed to have impact on human health due to likelihood of exposure to high particle concentrations in such indoor environments. In one of the reasearches, particle emission characteristics of 110 laser printers from different manufacturers were analyzed, and estimations of their emission rates were made on the basis of measurements of total concentrations of particles emitted by the printers placed in a chamber, as well as particle size distributions. The emission rates in terms of number, surface area and mass were found to be within the ranges from 3.39 × 108 part min-1 to 1.61 × 1012 part min-1 , 1.06 × 100 mm2 min-1 to 1.46 × 103 mm2 min-1 and 1.32 × 10-1 μg min-1 to 1.23 × 102 μg min-1, respectively, while the median mode value of the emitted particles was found equal to 34 nm.

In addition, the effect of laser printing emissions in terms of employees’ exposure in offices was evaluated on the basis of the emission rates, by calculating the daily surface area doses (as sum of alveolar and tracheobronchial deposition fraction) received assuming a typical printing scenario. For severe exposure conditions, characterized by operating parameters falling beyond the typical values (i.e. smaller office, lower ventilation, printer located on the desk, closer to the person, higher printing frequency etc.), higher doses of pollution are expected, hence higher risk of various diseases.

temperature, vapor pressure of the VOCs, amount of material deposited and

roller temperature and particle formation by measuring emissions from 30 laser

printers in a chamber, using a standardized printing sequence, as well as

monitoring the fuser roller temperature. They found that the temperature is the

(2012). In that case, the authors measured UFP concentrations before, during,

and after the operation of laser printing in 63 offices. They found ―significant

increase‖ of particle fractions between 0.23 and 20 μm in the offices during and

increased in 43 out of the 62 investigated offices.

In Fig. 1 and Fig.2. an example of particle number concentration trend measured by the CPC 3775 for one of the laser printer tested in the chamber, as well as the corresponding particle number distribution evolution measured by the FMPS 3091 are shown. This example of typical trends measured during all the tests performed clearly highlights: (i) the steady state concentration typical of the background measurement period, (ii) the concentration increase during the printing process up to the maximum value reached roughly at the end of the printing activity (about 6 × 105 part cm−3 for the laser printer under investigation); and (iii) the subsequent concentration decay due to the particle deposition and the air exchange rate of the chamber.

The solution for indoor air pollution we see in iTherapy technology of purifying and enriching the air.

Back to list
Older Fresh air in your house? iTherapy provides it!
close

You can find out more about which cookies we are using or switch them off in settings.

This website uses cookies so that we can provide you with the best user experience possible. Cookie information is stored in your browser and performs functions such as recognising you when you return to our website and helping our team to understand which sections of the website you find most interesting and useful.

Strictly Necessary Cookie should be enabled at all times so that we can save your preferences for cookie settings.

If you disable this cookie, we will not be able to save your preferences. This means that every time you visit this website you will need to enable or disable cookies again.